About 40 plus NGOs came together to attend the very first NGO Stakeholders introductory programme organized by Block Education Department of South Range – 4 in Bangalore. A novel attempt for knowledge sharing, networking of NGOs, (a few) Corporate and Volunteer groups on the intervention work carried out in Government Schools in the South Range – 4.

Program flow was kept simple with an inaugural function, keynote addresses by Deputy Director of Public Instruction and Block Education Officer on the support received and sought from stakeholders – NGO, Corporate groups. This was followed by a five minutes presentation of invited NGOs/CSR teams on their intervention/development models created and executed in Govt. Schools.

It was heartening to see an open forum where NGOs/Corporate could open up on their expectations/ challenges faced in working with the education department. Time taken in signing MoU/ permissions by BEO for development projects in schools/ for schools, single point of contact at the department, procedure of approaching BEO officer for permission, support sought from school authorities and the like were some of the main concerns raised by the stakeholders. 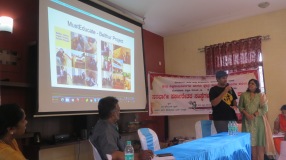 I had a short stint working directly with BEO office in organizing a beautification drive at Government Higher Primary School, Kowdenahalli with 60 plus corporate volunteers. It took couple of visits and persistent follow ups to get permission from BEO office as this was first such project in direct coordination with the education department.

It was encouraging that this short stint was remembered, appreciated and earned an invitation to the NGO Stakeholders introductory programme, where iVolunteer was the only one of its kind of organization.

Personally, this was an opportunity to network with like-minded NGOs/ Volunteer groups; to learn about the contribution of social services to students overall development in government schools; to realize how this particular sector was becoming a red ocean and how concentrated volunteer efforts could avoid duplication in intervention and ensuring optimum utilization of resources.

For the fact that this meet was planned in a short span of time with a short notice given to invitees, it served its purpose. (I recollect how the NGO invitee seated next to me expressed making their presentation that very morning as they were notified just the evening before! We were lucky as we got a day’s notice!). NGOs and NGOs had met the BEO!

For the fact that this meet was planned in a short span of time with a short notice given to invitees, it served its purpose.